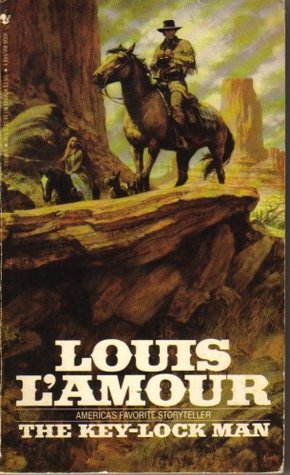 This short novel by Louis L’Amour is a western that takes place in Arizona just after the Civil War. It starts off with a man known only as the Key-Lock man (named for the brand on his horse) being hunted by a posse of 6 men and is accused of shooting a man in the back. The men are from of a town called Freedom and are planning to lynch him without the benefit of trial. But this Key-Lock man is mainly peaceable, maintains it was a “good” shooting and does his best to avoid his accusers.

Main Characters:
*Matt Keelock, a real “man’s man,”  only wants to live in peace with his new wife, capture the wild golden stallion he sees running the wild land and have a ranch. He is smart, clever and above all, fair. He doesn’t want to kill the men who seek to kill him, and he has plenty of opportunity; but if the lives of he and his wife are at stake, he will protect them at all costs.
*Kristina, Matt Keelock’s intensely beautiful wife, tall and blond, from a fine family in an unnamed northern country in Europe, killed her fiancé, fled to the American West to leave her past behind and to wed a man she’d never met, named Oskar Neerland. Though when they meet she finds him to be a violent man (he beats up his horse) and decides not to marry him, but marry Keelock instead despite their having just met.

Secondary Characters:
*Oskar Neerland, cruel and sadistic, vows to hunt down Keelock, kill him and once he’s “done with” Kristina, kill her too.
*The posse: Chesney, the dead man’s best friend and is determined to lynch Keelock; Kimmel; Hardin; McAlpin; Short; and Neill, who, being a newcomer to “these parts” is not so sure about being a part of the lynch mob.

Let me put this right out front – I am not a fan of westerns. I don’t watch western television, movies and certainly don’t read western-genre books. I guess I’m a bit of a snob. Or, maybe, it just doesn’t interest me to support the glorification of how the western part of this nation was stolen from its native inhabitants who were then called savages and slaughtered.

But, leaving all that aside, it was a okay book. The main character’s were fairly well-written but there was little – to – no background information on them. The reader is told about Kristina’s background but nothing is mentioned of Keelock’s. And, the secondary characters’ fared worse – we only meet them as they are related to this story. I also didn’t appreciate all the veiled talk from Neerland and his two henchmen about Kristina and what they were going to do to her when they caught her.

This is the only book I’ve read by L ‘Amour so maybe writing two dimensional characters is his style and that’s okay if that’s what you like to read. I was interested in finding out how it all ended and admittedly, I had to slog through it to get there.