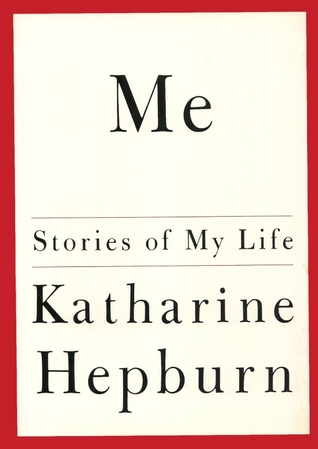 Me, Stories of My Life

Miss Hepburn tells the story of her life in this book. She talks about her childhood, movies and loves, especially the love of her life. She admits that she is headstrong, self-absorbed and self-centered –  except when it comes to Spencer Tracy.

o   We learn about Miss Hepburn’ parents, siblings, childhood and where she has lived.

o   Career beginnings on the stage and in Hollywood; marriage to Ludlow Ogden Smith; back to New York where she crashed and burned on the stage with a play, The Lake.

o   Big movies, big actors, famous directors and we hear about Spencer for the first time. She goes into greater detail about Spencer later in the book.

o   Miscellaneous stories about gardening, a trip to Italy, and her movie, The Corn is Green.

o   Spencer Tracy. Miss Hepburn tells not so much of their life together but of his final days and her grief at losing him. She also tells of the final leaving of the house they shared in California; very poignant, very sweet, very loving.

The book was a good read, it was interesting to find out about one of my favorite actresses. However the way it was written drove me absolutely crazy! This is my first auto-biography so I don’t know if it is ‘normal’ to write a book in such a conversational style. It is like I was sitting across the kitchen table from Miss Hepburn and she talking to me like I was her best friend. Really weird. She just rambles on from topic to topic, she stays in the same general area but her train of thought definitely skips the track a couple of times. She doesn’t tell the story chronologically but topically. For instance, she tells all the places she has lived, about her career, and her movies. This is not a book I plan on rereading, but I will keep it on our shelves for sentimental reasons – our mom gave it to her grandmother and it was later returned to us.

Rating:  3 Paws for the way it was written (conversational style); it would have been lower but the author is, after all, the fabulous Katharine Hepburn.

Katharine Houghton Hepburn was an American actress of film, stage, and television. Known for her headstrong independence and spirited personality, Hepburn’s career as a Hollywood leading lady spanned more than 60 years. She cultivated a screen persona that matched this public image, and regularly played strong-willed, sophisticated women. Her work came in a range of genres, from screwball comedy to literary drama, and she received four Academy Awards for Best Actress—a record for any performer.

In the 1940s Hepburn was contracted to Metro-Goldwyn-Mayer, where her career focused on an alliance with Spencer Tracy. The screen-partnership spanned 25 years, and produced nine movies.

Hepburn challenged herself in the latter half of her life, as she regularly appeared in Shakespeare stage productions and tackled a range of literary roles. She found a niche playing middle-aged spinsters, such as in The African Queen (1951), a persona the public embraced. Three more Oscars came for her work in Guess Who’s Coming to Dinner (1967), The Lion in Winter (1968), and On Golden Pond (1981).

In the 1970s she began appearing in television movies, which became the focus of her career in later life. She remained active into old age, making her final screen appearance in 1994 at the age of 87. After a period of inactivity and ill-health, Hepburn died in 2003 at 96 years old.

In 1999, she was named by the American Film Institute as the top female Hollywood legend.