From the back of the book, “From his boyhood in Hannibal, Missouri, to his last years in Connecticut, Mark Twain spent much of his life surrounded by cats, and they stalk through many of his best-known books. In this lighthearted book, Mark Dawidzak explores the writer’s lifelong devotion to cats, illuminating a little-known side of this famous writer’s life that will appeal to Twain aficionados and cat lovers alike.”

Well, its about time I got the chance to review a book (BobbieSue has nearly taken over the blog with her cozy mysteries!!). Before reading this little gem of a book, we didn’t realize Mark Twain was such a cat lover. Not only did he have cats of his own but when he went anywhere else to stay for an extended period, he would rent (meaning, borrow) a cat from someone else to keep him company.

This book covers various stories from Huckleberry Finn and Tom Sawyer, as well as various newspaper and magazine articles and even his autobiography. Some of the names of his cats were Abner, Stray Kit, Sour Mash, Zoroaster, Deuteronomy, Tammany and Billiards.

If you’ve read and enjoyed the home-spun antics of Mark Twain, then you’ll enjoy this book. And, as the publisher’s blurb says, if you love cats, you’ll really love this book. It’s a mixture of fiction and nonfiction, so if fits so many readers wants!!

Rating 4 out of 5 paws for also including photographs of Mark Twain with cats!!

From the dust jacket, “In Marionettes, Inc., Ray Bradbury offers his devoted readers something both special and unexpected: a unified view of one small corner of a varied fictional universe. In five stories (one of the original to this collection, plus a rare, previously unpublished screen treatment), Bradbury explores the concept of Robotics and examines its impact on the day-to-day lives of ordinary people.

“Several of these tales, including “Changeling” and “Punishment Without Crime,” are set in a world in which the eponymous company, Marionettes, Inc., has successfully created incredibly detailed replicas of existing men and women. When these surrogate “people” take their place in the real, often messy realm of human relationships, the results are sometimes tragic, sometimes ironic, and always surprising.

“But the true heart of this resonant collection is the classic novella, “I Sing the Body Electric.” In this quintessential Bradbury story, an electric “Grandma” enters the lives of a grieving, newly motherless family, and restores their capacity for wonder and joy. Like the very best of Bradbury’s fiction, it is a magical, deeply felt account of hope, grown, survival, and change, and a moving meditation on what it really means to be human.”

Ray Bradbury is another favorite author of the LoC. His short fiction is a wonderfully readable as are his novels. His imagination knew no bounds and he had a special knack for making the obvious mysterious yet understandable. The world lost a true treasure in 2012 when he passed on. Additionally, Bradbury had the talent of making the far-fetched seem normal. He wrote Changeling, Marionettes, Inc, and Punishment Without Crime before 1950 but the stories feel apropos today – at least in spirit.  My favorite, I Sing the Body Electric was first published in 1969 but was a 3rd season episode of the Twilight Zone in 1961. I am still amazed at how he saw the future as present and the problems of the day were the problems of the future. Perhaps he’s telling us that like felines, basic human problems don’t change.

Rating: 4 out of 5 paws for excellent short fiction!!!

From the dust jacket, “Margaret Atwood is one of the world’s most esteemed authors, a writer of wide range—novels, stories, essays, criticism. She now brings readers a collection of smart and entertaining fictional essays punctuated with her own wonderful illustrations. Chilling and witty, these highly imaginative, Atwoodian pieces speak on a broad range of subjects, reflecting the times we live in with deadly accuracy and knife-edge precision.

“Herein Atwood gives a sly pep talk to the ambitious young, writes about the disconcerting experience of looking at old photos of ourselves, gives us Horatio’s real views on Hamlet, and examines the boons and banes of orphanhood. “Bring Back Mom: An Invocation” explores what life was really like for the “perfect” homemakers of days gone by, and in “The Animals Reject Their Names,” she runs history backward, with surprising results. Prescient and personal, delectable and tart, The Tent is vintage Atwood.”

Margaret Atwood is most definitely one of the Library’s favorite authors. However, I find her short fiction to brainy for my tastes. These stories are very well written and the prose is beautiful; but it’s way too esoteric for me. I much prefer her novels when she takes the time to develop characters and their world. This book is one of those ones that could be reading list for a high school or college level course, with a hefty amount of thought and discussion afterword. That’s too much like work! This isn’t the first short fiction by Atwood that I’ve read and I didn’t like the other one either for the same reasons.

Rating: 2 out of 5 paws: Please take my low rating with a grain of salt and if you really enjoy reading books with double or even triple meanings, then please enjoy this Atwood book. She’s still a favorite of the Library and we’ll continue to read her books.

Alphinland – Constance, widowed only a short time, is holed up alone in her house during an ice storm. During the storm she reminisces about a previous boyfriend and her husband, whose voice she hears clearly as if he was standing right beside her.

Revenant – Gavin, a poet who was the previous boyfriend of Constance (Alphinland) has become an embittered old man dependent on his much younger wife, Reynolds, and finds a thrill in psychologically hurting other people.

Dark Lady – Elderly twins, Jorrie and Tin, recall their youth – Jorrie as a wild young woman who was in love with Gavin and came between him and Constance. This story brings some closure to the heartache begun in the first story, Alphinland, and continued in Revenant. I’m glad the author added this story to wrap everything up – the first two sort of ended without ending.

Lusus Naturae – What would you do if your child transformed into a lusus naturae, a “freak of nature?” One who has long silky hair growing on her chest, hears voices that aren’t there, develops pink teeth, yellow eyes and red fingernails, and who drinks blood? What would you do?

The Freeze-Dried Groom – An antique dealer who sells faux antiques, is the middle man for a smuggling operation and is thrown out by his wife purchases a storage unit at an auction and uses its contents to his advantage.

I Dream of Zenia with the Bright Red Teeth – Three elderly women, long-time friends, a ghost of a fourth friend, a dog and a scumbag of an ex-boyfriend. The dog wins the day!!

The Dead Hand Loves You – The author of a pulp-horror book that became a smash-hit rues the day long ago when he signed a contract with three of his roommates from college to equally split in four ways the proceeds of his as-yet-unpublished novel.

The Stone Mattress – On a cruise through the Arctic a woman takes revenge on a man who did her terribly wrong some 50 years earlier.

Torching the Dusties – A resident of an assisted living development, Wilma has Charles Bonnet Syndrome with her macular degeneration so she is virtually blind; she depends on her friend and co-resident, Tobias to guide her through a darkening world. But the world is turning darker as there is a movement of young people who take revenge on an older generation for leaving the world in the mess that its’ in and the government is too busy with natural disasters around the country to stop them. The question remains, did Wilma and Tobias survive?

So out of these 9 tales only in 2 of them is the protagonist not an elderly person. I’ve never read so many stories from the viewpoint of the elderly. It’s a really interesting viewpoint – most of the books I read are from a young person’s POV – they have their whole lives ahead of them and are so young and hopeful. In these stories, the characters look backward and their lives and mull them over.   I really enjoyed these stories, so different and so relevant – at least to my humom who is old.

Ms Atwood has written a TON of books, stories, poems and so on. Go HERE for her full bibliography.  She definately one of the Library’s favorite authors! 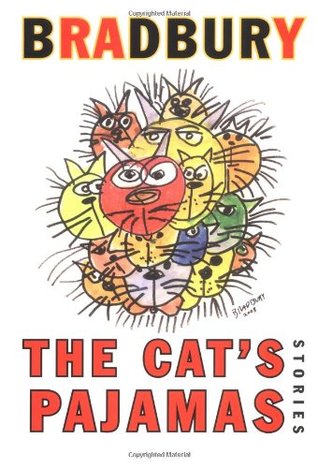 William Morrow, an Imprint of HarperCollinsPublishers, 2004

Another wonderful collection of stories by the inimitable Ray Bradbury. Some were written many years ago, some written recently (with the publication date). As I usually do with short story collections, I will highlight my favorites!

Hail to the Chief – you know how Congress never gets anything done? What would you say if 13 Senators up and gambled away the United States? Well, I would say, at least they accomplished something! This story concerns a senatorial delegation who, in one drink and gambling filled night lost the country to a Native American Chief. The President’s reaction is laugh out loud funny! Great story. It would have made an excellent episode on The West Wing (one of mom’s fav all-time TV shows).

A Careful Man Dies – first-person story of a hemophiliac who goes to extreme lengths to evade the people set out to kill him.

The Cat’s Pajamas – the title story, about two strangers who fight over an abandoned kitten they find on the side of a road.

I’ve read and reviewed a few of Bradbury’s many books – and have loved them all, albeit, some more than others. My favorites continue to be his other-world stories; sadly, there is only one in this collection (A Matter of Taste). But he does have the enviable ability to capture moments in people’s lives  – quick snapshots that are full to the brim with meaning and wonder.

Rating 4 out of 5 paws – it might’ve been higher if there were more other world stories; however, an extra purr goes to the story of a kitten rescue and the humans who loved it.

Nothing to do with the book, but here are some cats in pajamas!