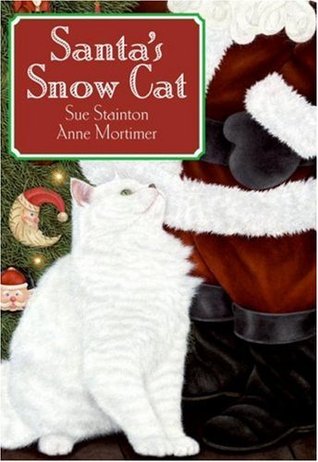 Snow Cat is Santa’s favorite cat and she travels with him everywhere – especially on Christmas Eve. One Christmas Eve she becomes enchanted by the lights in the city below and accidentally falls from the sleigh. She falls into the streets of New York City and in searching for her own Santa she comes across many “nearly” Santas and being frozen and tired, she gives up hope.

A beautifully illustrated sweet story of reassurance that if you get lost the one who loves you the most will find you again. It is a sweet bedtime story for Christmas Eve night, to remind the reader that Christmas is more than presents and busyness. It is also about love.   Santa searches for her and lands on the “tallest of tall buildings” which, with an illustration of Santa on the World Trade Towers, provides a poignant reminder of what was lost and a promise of the future.

Rating: 4 Paws for the purity of heart and the love of Snow Cat and Santa.

Other books by Sue Stainton:

Other illustrations by Anne Mortimer (there we so many to choose from, I chose only cats in winter!)

Other books illustrated by Anne Mortimer

from Pix for Ragdoll Cats

And finally, our own Santa’s Snow Cat, Laura (although she has yellow eyes, but don’t tell Santa!)