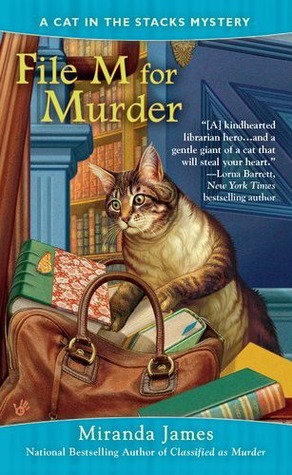 File M for Murder
A Cat in the Stacks Mystery

Diesel is back again with his comforting chirps and warbles for those he loves during a very stressful episode. He also saves his family from a letter bomb! Smart cat, that Diesel. Charlie’s daughter comes to Athena to teach an acting class at the college and has to deal with an obnoxious playwright and his psycho stalker.

Main Characters:
*Charlie Harris, rare book librarian and cataloger, doesn’t get to spend as much time in the library during this book because of all the craziness happening at home.
*Diesel, Charlie’s sidekick, a very large Maine Coon with a keen sense of human character.
*Laura Harris, Charlie’s daughter, home for a semester from Hollywood, is suspected of the murder of her former fiancé and then someone attempts to kill her three times because she may – or may not – know information pertinent to the murder.

Continuing Characters:
*Sean Harris, Charlie’s son – he is a lawyer who recently quit his practice in Houston to move to small town Mississippi. He lives in Charlie’s house.
*Stewart Delacorte and Justin Wardlaw, boarders in Charlie’s house. Stewart teaches at –  and Justin attends –  Athena College.
*Kanesha Berry, Chief Deputy Sheriff in charge of the murder investigation, reluctantly accepts Charlie’s help again with solving the murder.
*Azalea Berry and Helen Louise Brady are around also with their delicious food!

New Characters:
*Connor Lawton, writer-in-residence, playwright and Laura’s former fiancé. The words arrogant and obnoxious are too nice to be used to describe him. Maybe just plain yucky would be adequate. Anyway, someone has had enough from him and takes him out, permanently  – but who? He never met a person who didn’t hate him. The list is so long with suspects!!
*Damitra Vane, Connor’s former girl friend and current psycho stalker. She makes more than one attempt to accost and threaten Laura.
*Ralph “Montana” Johnston, writer of deplorable plays & his wife, Magda Johnston who is carrying on with Connor.
*Sarabeth Conley, she works in the theater department and used to take care of Charlie when he was a little boy. We find out later she also babysat Connor – hmmm, I wonder what dark secrets she’s hoarding?

Another well written and relaxing cozy mystery read from Miranda James. Like the others I’ve read, this book is hard to put down. Each chapter just leads seamlessly into the next one and before I know it I’ve read half the book and spent several blissful hours doing so. I love the world the author has created as well as the mystery. I did guess one of the culprits early on but that didn’t lessen my enjoyment of the story.

Yes, this is Miranda James! It’s a pseudonym of Dean James.

4 thoughts on “File M for Murder”