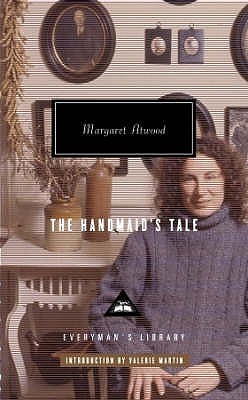 This is our 3rd reading of this book but the first time it has been reviewed here and we fully anticipate a 5 paw rating.  But because it is a book that is as important now as the day it was first published (1985) and because it has been challenged (read: banned), The Board felt it necessary for me to read and review it time for ALA’s Banned Books Week in September.

The synopsis, in case you don’t know it already: At some point in the future the United States has gone through a religious civil war of sorts as well as rampant toxic pollution has left the population in decline. The country is now the Republic of Gilead and while all persons of color are rounded up and sent to the Colonies to clean up toxic waste and die, women are no longer allowed to read and are divided up into those who can have babies and those who can’t.  Those who are fertile are forced to be ‘Handmaids’ and once a month must endure a ceremony that will – hopefully – make them pregnant. Those who aren’t able to give birth to viable babies and those who are trouble makers go to the Colonies as well. If a man didn’t want to convert to the new religious government they were executed.  Some middle-aged women end up as housekeepers (Marthas) or matrons who train and watch over the Handmaids (Aunts). Scary world. It could happen to us. Something like it has already happened to the women of Afghanistan.

Main Character:
·         Offred – The Handmaid given to the Commander (high government official) strictly for breeding purposes; this is her story, told in present day events mixed with flashbacks to her former life with her husband and daughter, before the War; she dresses only in red to signify her ability to conceive a child; she, like all Handmaids, are known only by their Commander’s name (Ofwarren, Ofglen, Of[insert man’s name here].

Secondary Characters:
·         Serena Joy –  aka The Wife, an embittered older woman, desperate for a child if only to raise her limited social status, and, like all Wives,dresses only in blue to signify her status.
·         The Commander – head of the household, performs his monthly duty, since the story isn’t about him, we don’t find out much
·         Rita and Cora – the Marthas, housekeepers and cooks; too old to conceive, they wear only dull green dresses
·         Nick – a Guardian (junior soldier/police officer) and chauffeur for the Commander; Guardians are young men who hope for two things: to become Angels (soldiers) and fight along the front lines of the War; and to be assigned a wife.
·         Ofglen – fellow Handmaid and  Offred’s walking partner
·         Moira – rebellious and brash, she was Offred’s best friend from before the war
·         Aunt Lydia and the other aunts – Offred’s and the other Handmaid’s teacher/overseer(s) at the Red Center, the place where women are indoctrinated in how to conceive and give birth to a child only to immediately give it up to the Household to which they belong.

The story is riveting and and sad and frightening all at the same time. We never learn Offred’s real name, or that of her young daughter she was forced to give up when her husband was killed and she was taken away to be a Handmaid. Ms Atwood writes Offred’s story in first person as the present blends seamlessly with the past throughout the book.  Her writing reminds us of Ray Bradbury’s earlier works – melodic, full of metaphor and beauty. The novel truly showcases the beauty of the written word and reminds us how precious the freedom to read what we want is and how easily it can be taken away from us.

In this book, Ms Atwood conveys a truly realistic version of a dystopian world – one that could even happen in our lifetime. And that is a frightening prospect indeed.

According to the American Library Association, this book, published in 1985, has been challenged in the following ways:

1990 – challenged as a book assignment at the Rancho Coati High School in Rohnert Park, CA because it is too explicit for students.

1992 – challenged in the Waterloo, IA schools because of profanity, lurid passages about sex, and statements defamatory to minorities, God, women, and the disabled.

1998 – challenged for use in the Richland High School (WA) English classes along with six other titles because the “books are poor-quality literature and stress suicide, illicit sex, violence and hopelessness.”

1999 – challenged because of graphic sex, but retained on the advanced placement English list at Chamberlain High School in Tampa, FL.

2000 – downgraded from “required” to optional on the summer reading list for eleventh graders in the Upper Moreland School District (PA) due to “age-inappropriate” subject matter.

2001 – challenged, but retained, in the Dripping Springs, TX, senior Advanced Placement English courses as an optional reading assignment. Some parent were offended by the book’s descriptions of sexual encounters.

2006 – the Judson (TX) school district board overruled Superintendent Ed Lyman’s ban of the novel from an Advanced Placement English curriculum. Lyman had banned the book after a parent complained it was sexually explicit and offensive to Christians. In doing so, he overruled the recommendation of a committee of teachers, students, and parents. The committee appealed the decision to the school board.

2012 – challenged as required reading for a Page High School (NC) International Baccalaureate class and as optional reading for Advanced Placement reading courses at Grimsley High School because the book is “sexually explicit, violently and morally corrupt.” Some parents thought the book is “detrimental to Christian values.”