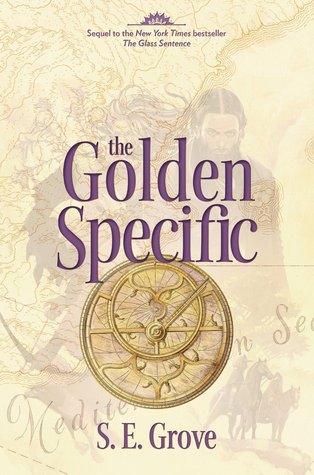 Teenaged Sophia Tims continues the search for her missing parents in a world that as gone all topsy-turvy due to the Great Disruption, an occurrence of Time in which the earth was suddenly broken into different Ages, or eras. In this book Sophia travels to the Papal States, formerly known as Spain, Portugal, Italy, etc. While the time in which Sophia lives is 1892 with a 20 hour day; in parts of the Papal States it is the Dark Ages, or, pre-1790.  We also meet people from a future time, as well as Sophia’s parents. Confused? Right there with you!

Main Characters:
·         Sophia Tims has several visions of her mother calling for help so she adopts a Nihilistic persona, Every Tims, in order to gain access to the Archive where she hopes to find a clue to the whereabouts of her parents.
·         Theodore ‘Theo’ Constantine Thackery, the young man from The Baldlands who accompanied Sophia on her previous foray, now ends up staying behind in New Occident while Sophia travels abroad. He recognizes Gordon Broadgirdle from his prior life as a thief and seeks to clear Shadrack of murder charges.

Continuing Characters:
·         Shadrack Ellis, Sophia’s uncle and new Minister of Relations with Foreign Ages has had to set his map-making behind because he is fighting his fellow ministers to keep New Occident from expanding forcefully into the Western Age, where the Indian Territories enjoy a large chunk of real estate and peacefully (for the most part) coexist with New Occident and the Baldlands. He is framed for murder of the Prime Minister by Broadgirdle.
·         Mrs. Clay, housekeeper for Shadrack and Sophia, also from The Baldlands. She is mostly around to worry and cry.

Secondary Characters:
·         Minna & Bronson Tims, Sophia’s long-lost parents. We hear more about them in this book because we get to read excerpts from Minna’s diary even before it is found by Sophia.
·         Captain Wren, Captain of the Kestrel, a ship and crew from the Encephalon Age, a future age, whose ship rescues Minna and Bronson from the middle of the ocean after the ship they were traveling on ran afoul of some sea monsters and sank.
·         Remorse, aka Cassia, a Nihilisman who works in the archive and tricks Sophia into delivering some cargo to the Papal State
·         Gordon Broadgirdle, evil, self-serving minister in New Occident’s government who has a horrific past that only Theo knows about. He wants the Indian Territories in the worst way – even if it means by force.

So first impressions of the book were that it was hard to get into and hard to keep my focus. One of the problems for me are the interspersed excerpts from Minna’s diary. While the excerpts provide needed background information, their inclusion seems random. But then when it is revealed that the sailors who rescue Minna and Bronson are from a future age it just got to be too much for me. All I’m doing right now is slogging through this 501 page book and have thought on more than one occasion to take it back to the library. Life’s too short to read confusing books.

Rating: 0 paws out of 5 because I was unable to finish. Great concept. Just not for me.